I had a great time (as usual) last night with my photobuddies, Dara and Marciana. Dara and I have long been admiring the the beautiful images Marciana has created at Clinton Lake – which is only about 10 minutes from her home in Lawrence, as we found out last night! We also realized we’ve all been friends for about eight years now – since we first met on a random photowalk in the Flint Hills.

But I digress. Finally, yesterday Dara and I made the short road trip Marciana’s and she took us to a couple of her favorite spots at Clinton Lake. The weather was amazingly perfect for August, nice and cool and not too humid. Even the bugs cooperated (mostly).

Well, we back went to our spot, anyway – which was considerably smaller now – and set up. The fishermen were really nice, so we couldn’t be too irritated. And Marciana was gracious enough to not shoot last night, since she goes there so often. So, Dara and I set up shop just in time for the sun to start dropping.

Dara posted a gorgeous image on Facebook today, which is so incredibly more amazing than mine – and she was just a few feet away! Oh well. I also realized I should have taken some bracketed exposures to capture more detail in the rocks, so that’s a good thing to learn!

Oh, and I didn’t have my usual long lens (80-200), which I sadly recently dropped and broke, so I had to shoot with a much shorter zoom (18-70). I really like this lens, though, and it’s actually nice for landscapes. It’s just a bit different not to have the option to go longer. Anyway, here are a few shots from our fun evening.

Oh! One more thing. We were on a fairly short, narrow outcropping of rocks, and Dara was to my left, at the end of the outcrop, and the fishermen and the trucks were to our right. You can actually see a fishing rod peeking out of the trees on the rights. Poor Marciana was just behind me and got off a few, but not too many, shots. So, it was pretty close quarters. But we were happy there were some happy little clouds, there, too.

Very first shot of  the evening. I kind of like the flare. 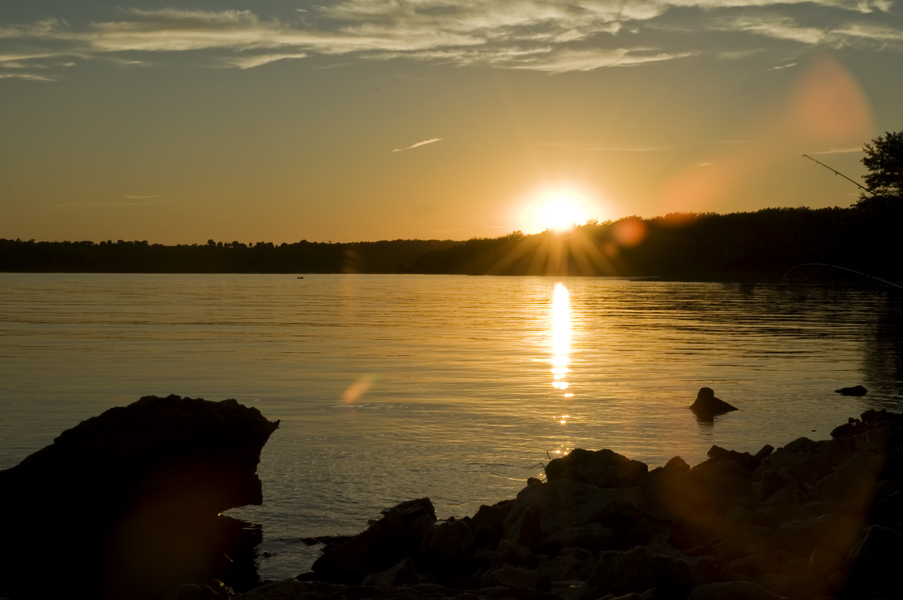 A couple of minutes later, and I decided to try a vertical. I like them both. 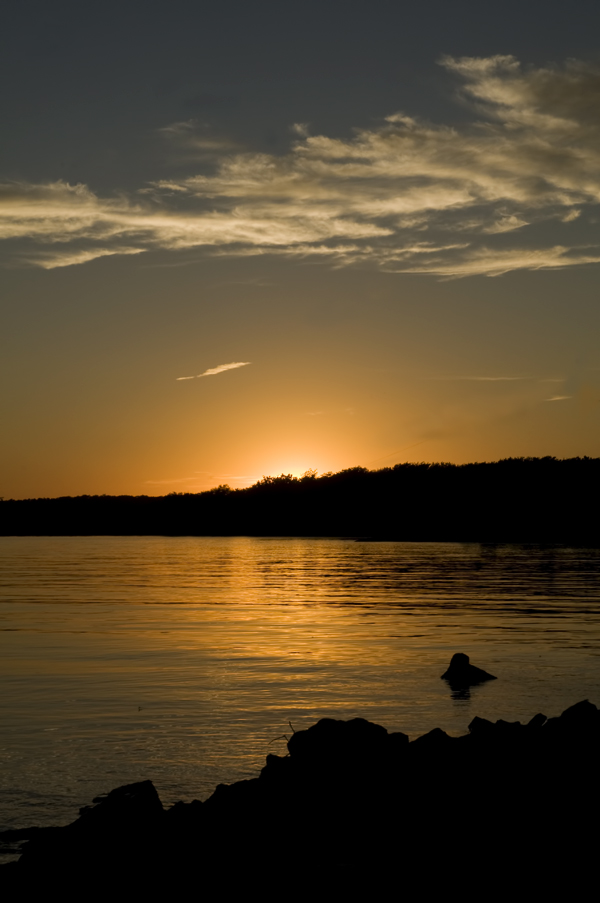 I realized my camera was auto-adjusting my ISO, which meant I was shooting my first shots at ISO 1600 – which is pretty noisy. I stopped that nonsense, but that also meant that since the shutter was open longer to accommodate the slower ISO, the movement of the water made it much softer, which I kind of liked. So I like the softness and colors of the water here, but the rock looks like some kind of gigantic fish monster coming out of the water – totally contradictory to the mood I was going for! 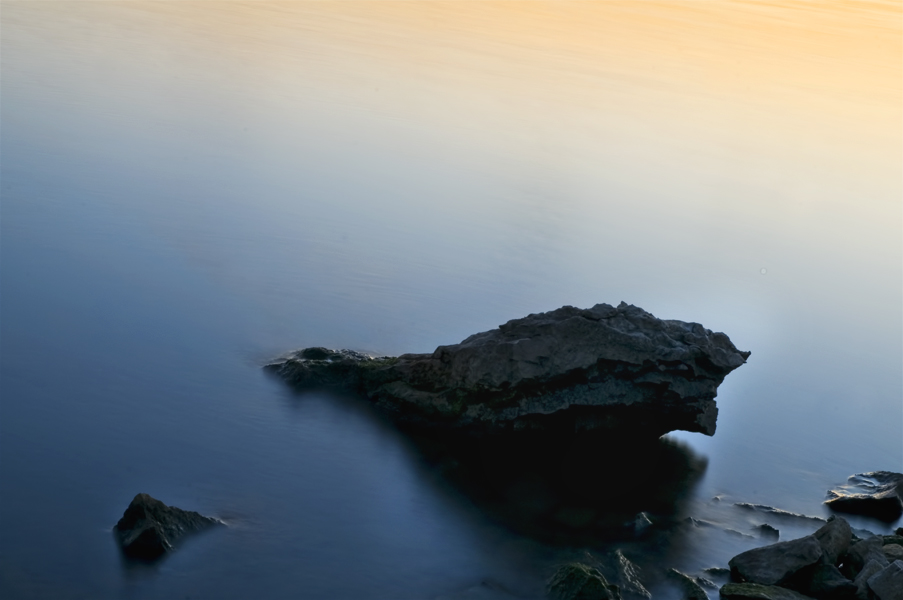 I’m trying to remember to “turn around” whenever I’m shooting, so I looked away from the lake and saw the fluffy clouds with the pretty pink/orange colors reflecting off them. 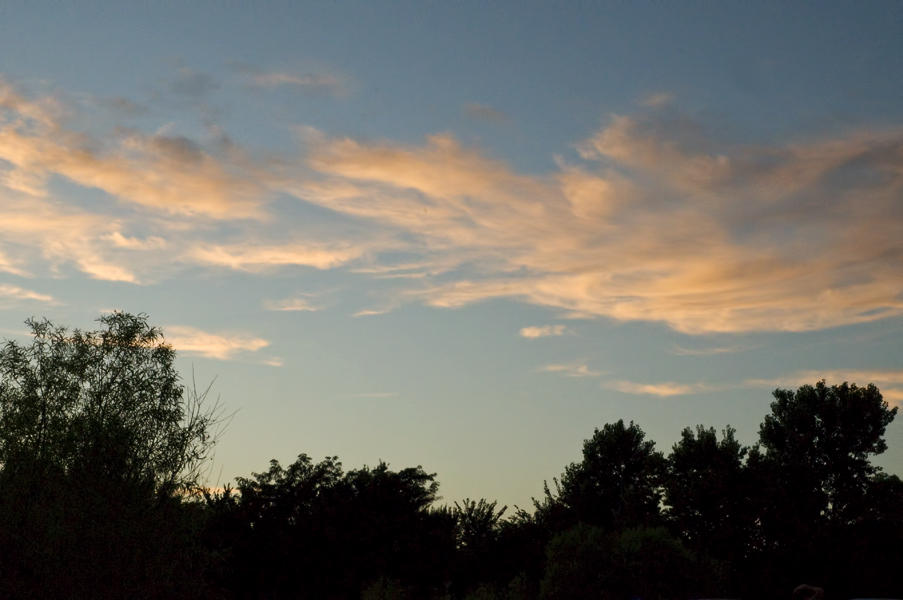 Another traditional shot, this time without the flare. It’s pretty a pretty typical sunset shot, I think, although I like the rays of the sun shining through. 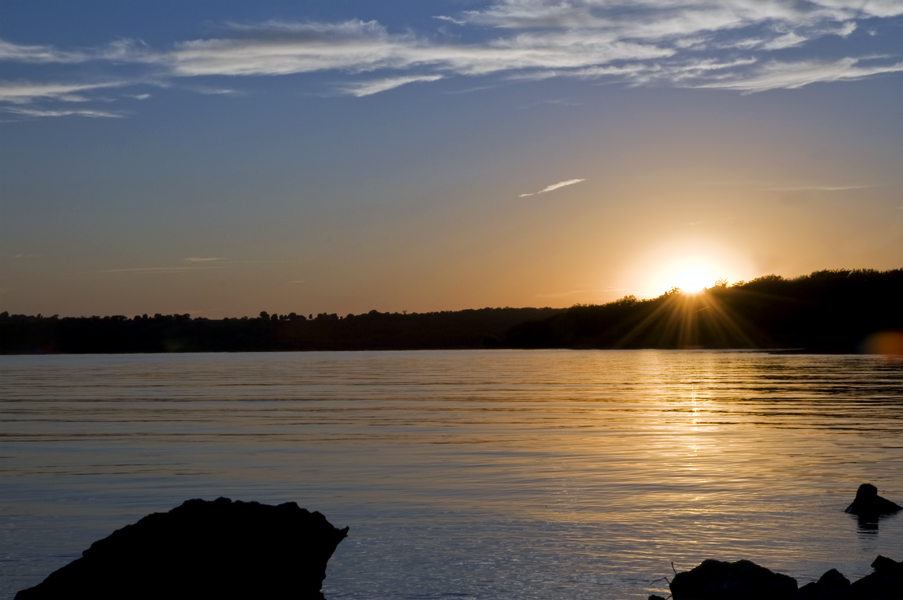 Finally, there’s my monster fish rock again, but I love the colors here. They’re pretty much as the camera first captured them. And again, the water is softer with the longer shutter speed. 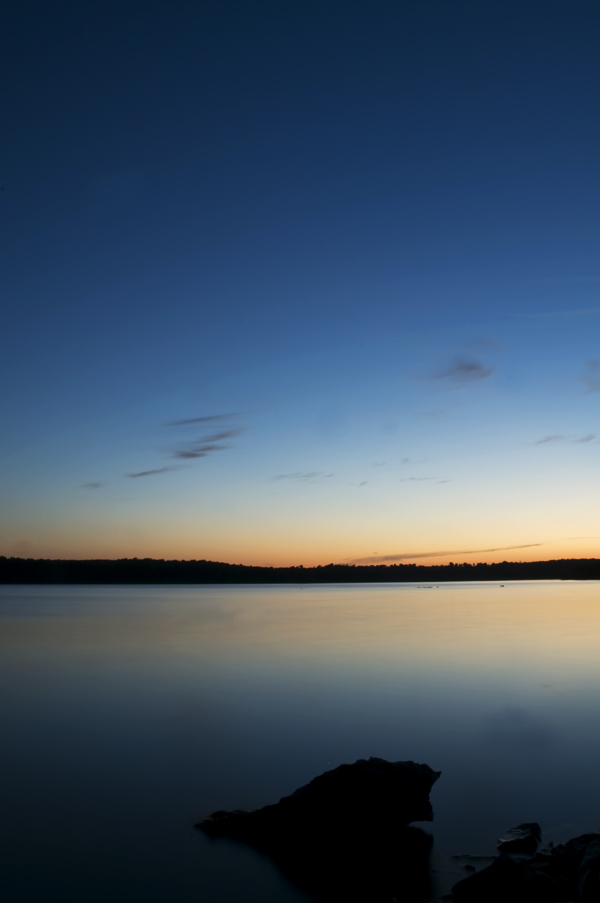 And that’s that. A few shots from a fun evening with friends on Clinton Lake. I look forward to more road trips!

This entry was posted in Nature, Photography.