Midwest temps have been ridiculously more like August than June lately. But they’ve cooled off a bit, and my photobuddy Dara and I happened (thankfully) to have scheduled our June photowalk this week. Well, technically we set out on July 1, but what’s a day here or there. So, for our June walk, we decided to shoot some pics of downtown KC. We’ve shot there before, notably for the Scott Kelby Worldwide Photowalks, which usually take place in the fall. So, there you go. Or, there we were.

I haven’t shot any photos in quite a while, other than the family birthday parties of my great nieces and nephew. Which are totally different than shooting building and trees. Funny that kids don’t cooperate as well as inanimate objects. You’ve gotta be fast, because they’re on to something new every instant! And once that moment is gone, it’s gone.

Although I haven’t been shooting pics lately, I HAVE been painting. I just took a watercolor class with my best friend – Tuesday and Thursday nights for the month of June. I think I should be a professional student. It was for beginners, which is precisely what I needed. I’ve painted with acrylics before, and I’m pretty much self-taught – so I paint in a hit-or-miss sort of way, without really getting why something works well – or turns out dreadfully. It’s always an adventure. Our instructor ended up giving me some helpful advice in every class that turned around several potential disasters into some images I was (pretty) happy with. But I’ve gone off topic.

Here are some of the pics I managed to get on Friday. Oh, I also dropped my go-to zoom lens a couple of months ago! And it sadly stopped working. Curses! So, I’m using a shorter lens, which I actually enjoyed. I’ll see if my old faithful can be repaired, or if I’ll be looking for a new zoom sometime soon.

The shots are in the order I took them, so you can get the feel of (well, kind of) walking along with me today.

And, the photowalk begins.

KC’s new streetcar. I haven’t ridden it yet, but it’s proving pretty popular so far. Will have to give it a try soon. We’re in a walkway over Main Street. 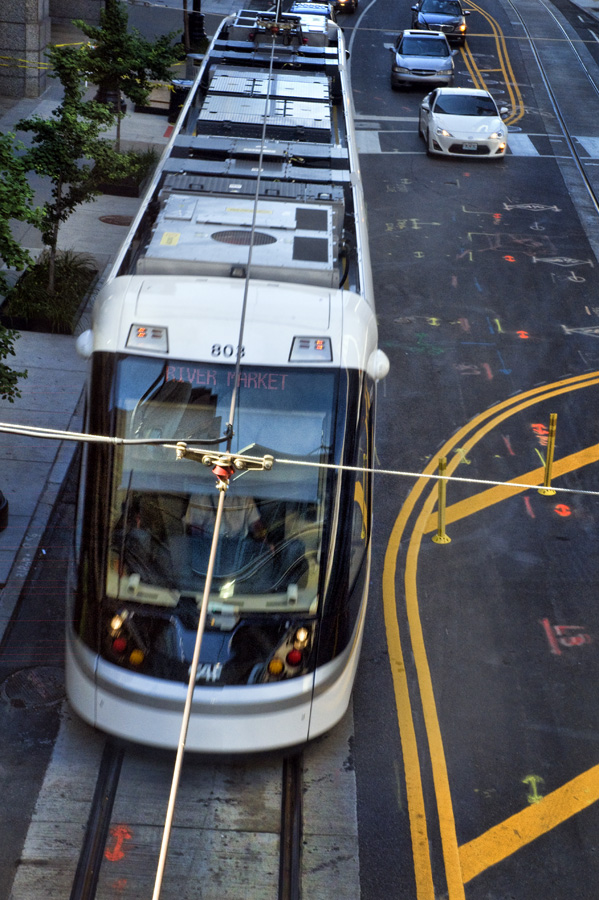 Early (for us) morning view from the old Petticoat Lane walkway that passes over 11th Street. (I found an old photo looking east from roughly the same place!) 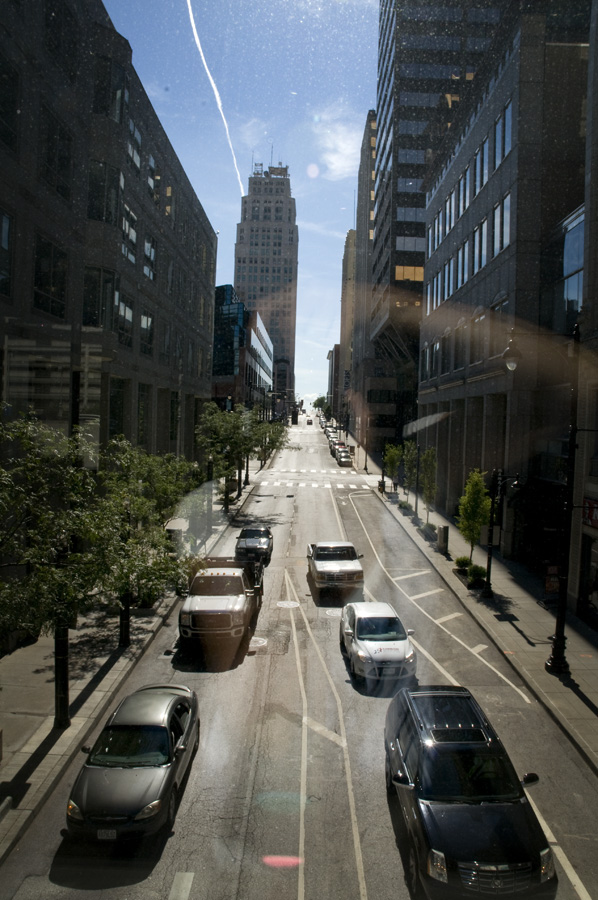 One of my patented “reflections.” I’m glad I caught the businesswoman (?) striding across the street, too. 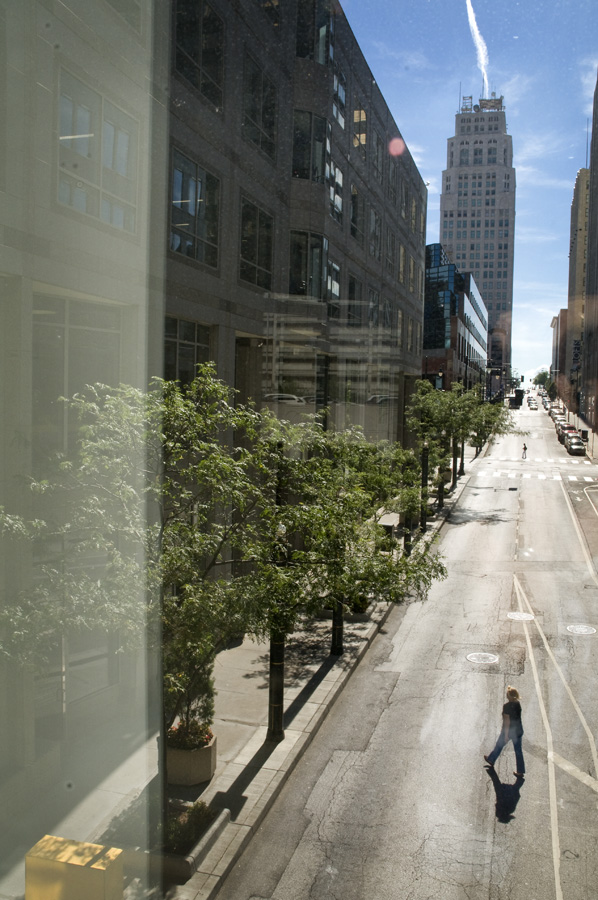 Now, you’re in for a bunch of buildings – angles, sky, reflections, all of the things you see looking up on a city street.

A little slice of morning sunshine. 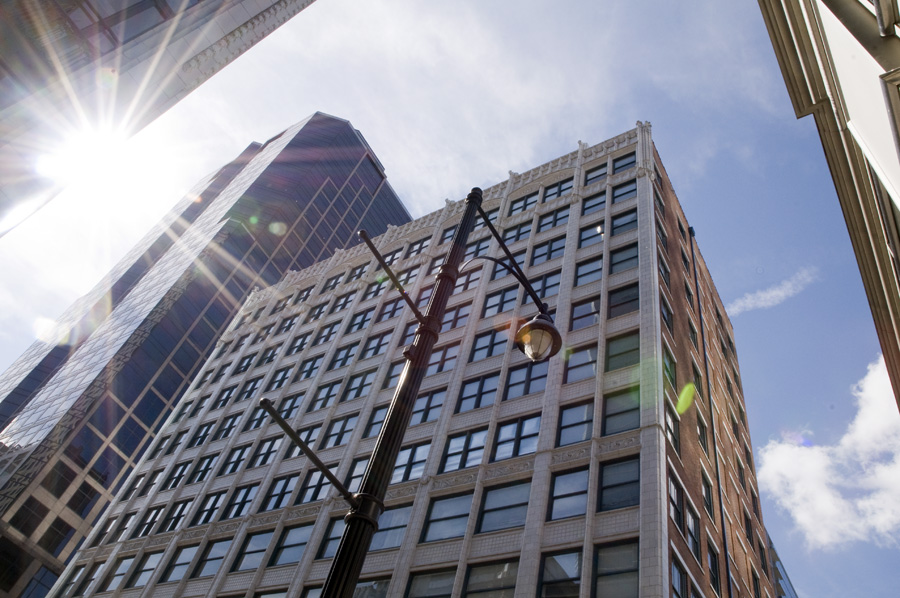 I always like the combination of older (classic) and newer (glass) buildings. But, I prefer not too see many newer ones. For some reason, I think the building on the right looks like a hotel on Daytona Beach overlooking the ocean. But then again, it could be lofts. 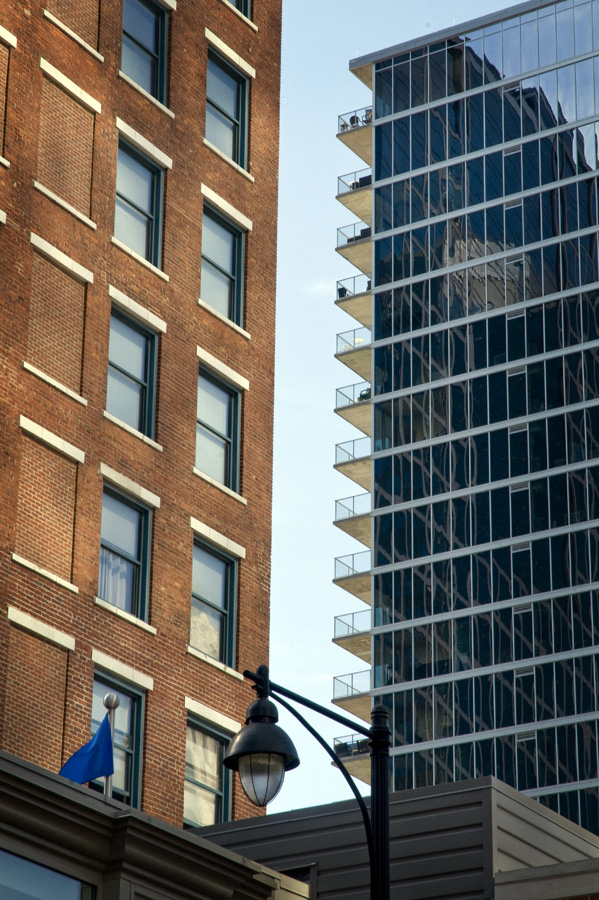 I like the bits of nature showing from the leaves on the plants and trees, mixed with all of the urban buildings and street signs. 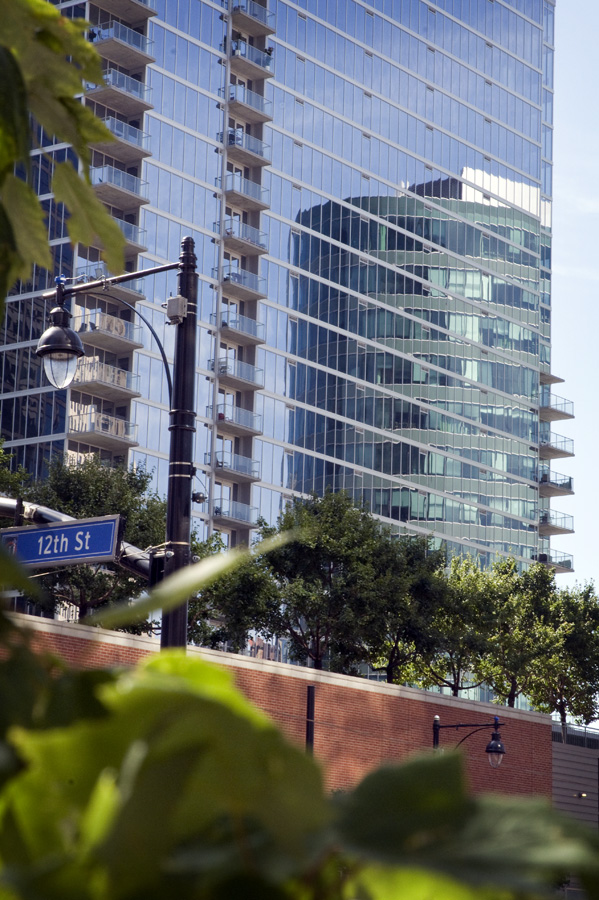 Again, old and new, but this time, reflected. Lots of lines here, too, every which way. 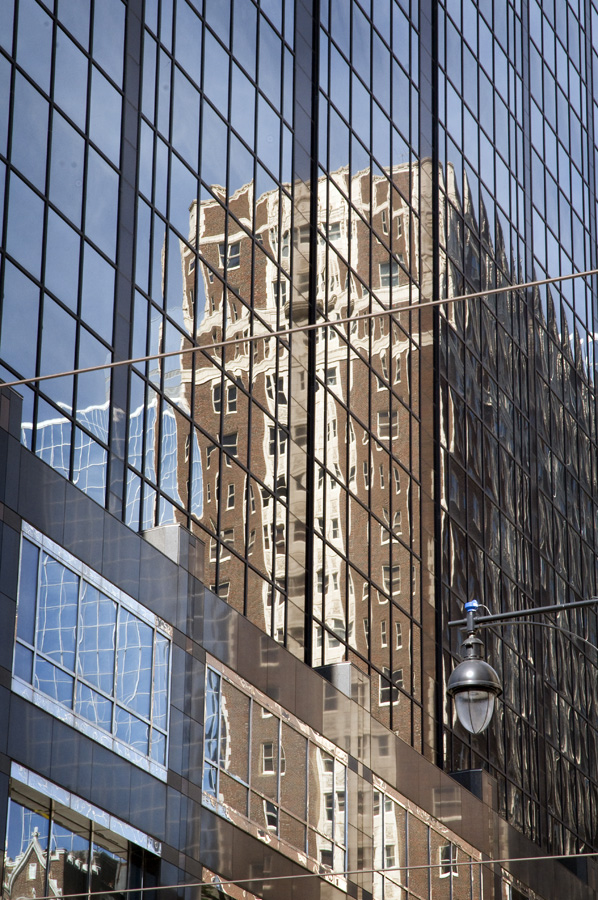 I think I was born too late. I love old hotels – and writing on brick buildings. I’ve never noticed this old hotel before. Or ever even heard the name. I assume it’s full of offices now. Hmmm. Okay. I just googled the Bray Hotel and found an old poster image. 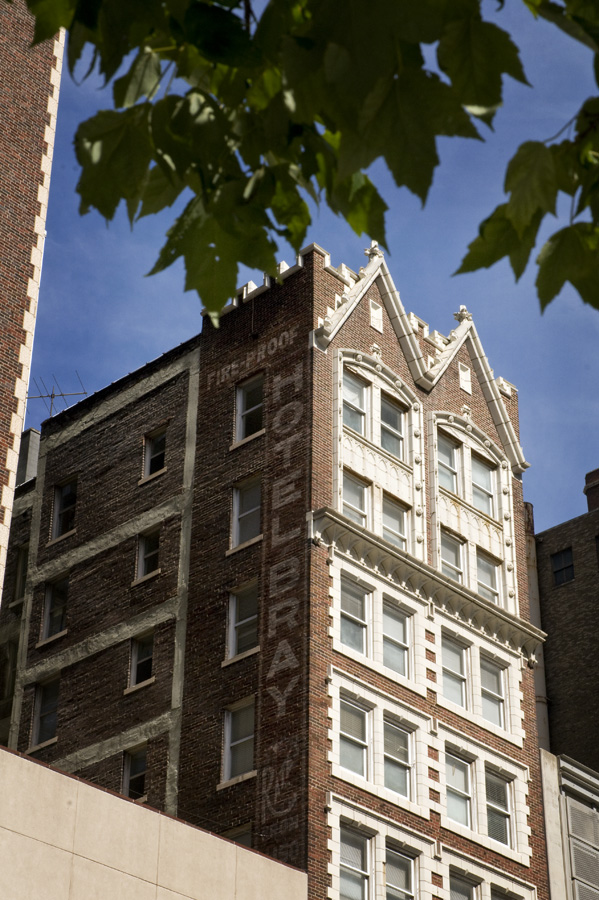 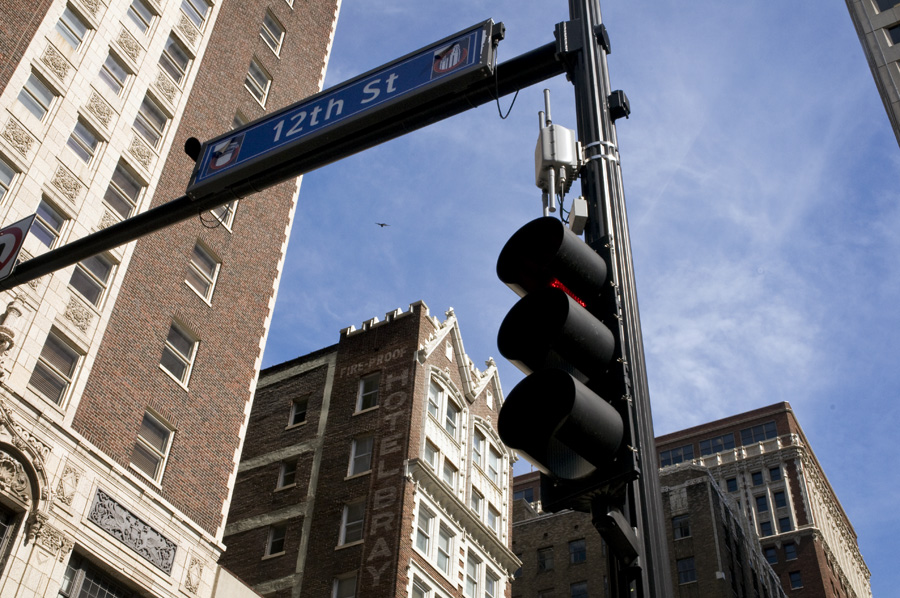 I don’t know why – or where I think this is – but this shot doesn’t look like KC to me. “You’re not in Kansas (well, technically, Missouri) anymore.” But, of course, it is. 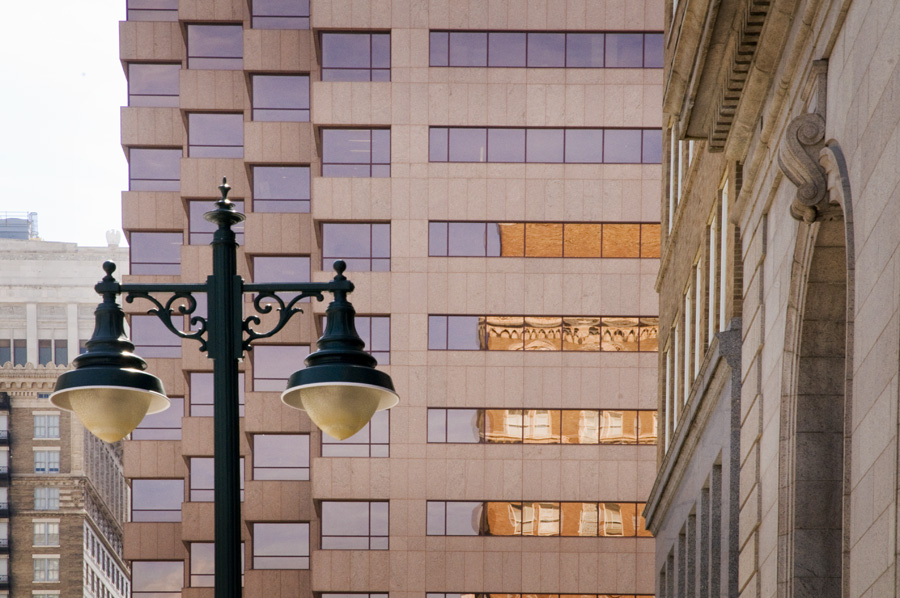 And finally, a few “nature” shots from our River Market. Or is it City Market? I can never remember what we’re calling this area anymore. When I was younger, it was called the River Quay. Until it was literally bombed away by the mafia. KC does have some interesting history. (Wait! I just noticed the first streetcar pic says “River Market.” I guess the City Market is IN the River Market.) Anyway, today, here are some flower baskets. 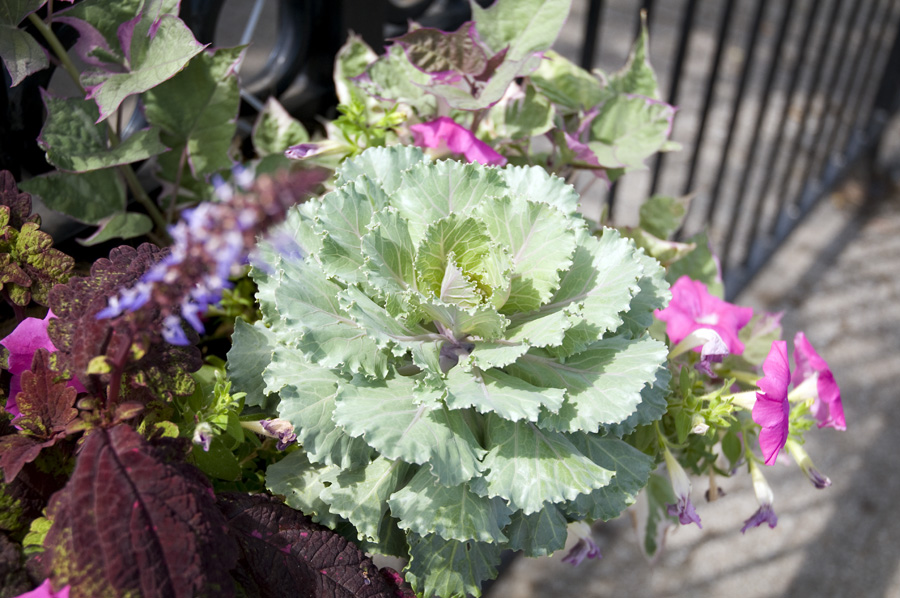 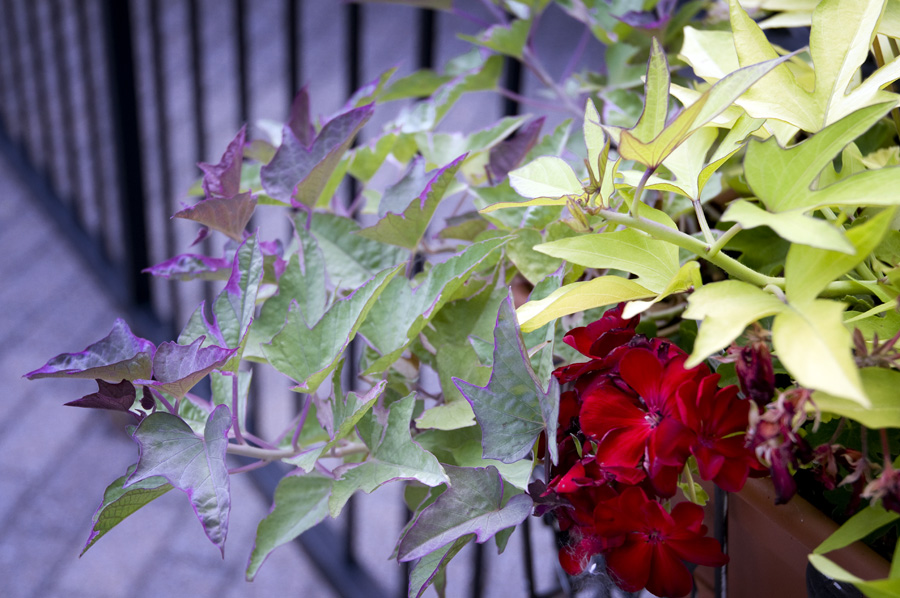 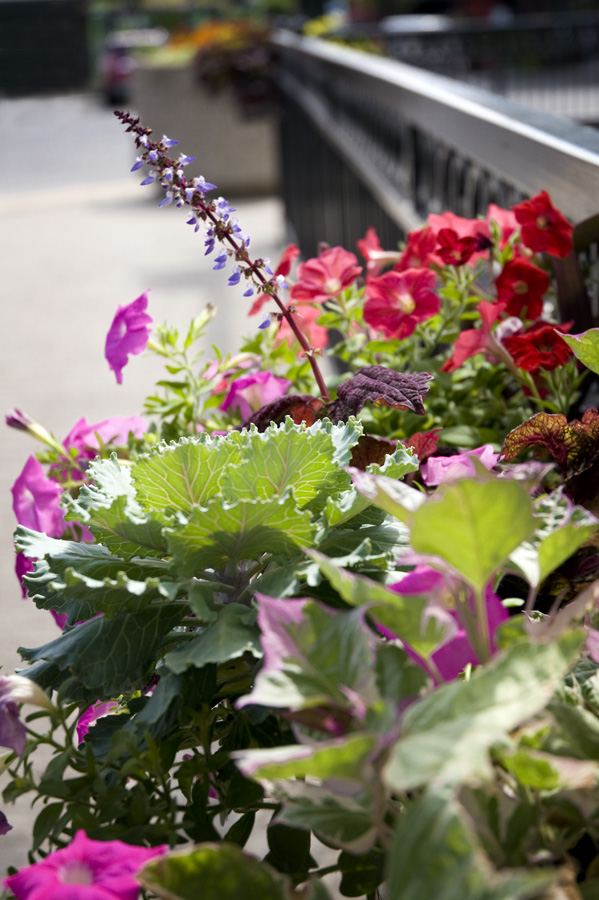 And there you have it. A fun morning wandering around downtown Kansas City on a beautiful July morning.

This entry was posted in Kansas City, Photography.